2013 Harvest begins with sprint intensity, but evolves into a marathon… 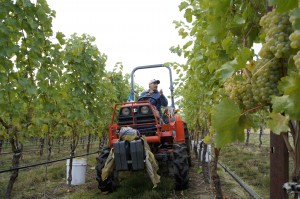 Overall, this was an extended, more evenly paced harvest…perhaps the most enjoyable yet. Starting with Sauvignon Blanc in September and ending with Cabernet Franc and Tempranillo the first week of November – David compares the 2013 harvest to a “two month marathon.” Although the timing was somewhat unexpected, I’ve always enjoyed marathons to sprints.

With the unusually warm days of summer this year, the sugars increased steadily in our wine grapes at Varner-Traul Vineyards. Heather returned from a short vacation in October, thinking that harvest would be coming to an end. Little did she know, we were just at the 13.1-mile marker and only half way to the finish.

We spent many more hours in the vineyard tasting fruit, measuring numbers and waiting until flavors were “there.”  Then, the weather turned cooler, with frost warnings and waking to the sounds of windmills in the vineyard, pulling warmer air in to protect the crop. Ledger and Slater used to enjoy the sounds of the “helicopters” in the night but at the age of 4 and 2 ½, they already prefer sleep in those early morning hours.  As for the grapes, this cool weather shift at the end of the season allowed for more complex flavors to develop.

Our final day of harvest started a bit chilly and ended with sunshine. On November 3rd, Heather, Mariano, David and an enthusiastic crew brought in the last of our Tempranillo.

As in prior years, we had the benefit of working with multiple winemakers to harvest and ultimately produce this vintage, which may prove to be a landmark year for Ledger David. We look forward to sharing 2013 releases, new blends, and what may be some of the best estate wine our Rogue Valley vineyard has ever produced!