The Rogue Valley AVA: A Cool Spot in a Warm Climate 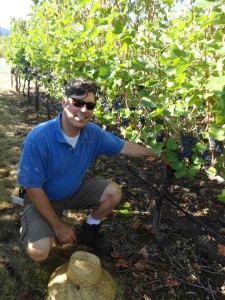 Winemakers read. Some of us read fiction, some read biographies, but invariably we all read about wine in some way at some time. People, really smart people, all over the world write on Grape Growing, Wine Production, Wine Branding, Wine Marketing, Wine Sales, Wine Inventory, Wine and Climatology, Wine and Geology, Wine and Soil Science, you get the idea. I read about wine and the wine industry more that I probably should, but it’s almost an escape for me at times. A few months ago I was reading about the Aesthetics of Wine and ran across a great line that provoked me. “Many of the world’s most profound places for growing wine can be filtered down to two ideals, a warm spot in a cool climate or a cool spot in a warm climate.” Remember, in the Northern Hemisphere the south- to west-facing slopes are hottest while north- to east-facing slopes are cooler than flat land (in the Southern Hemisphere the north-facing slopes are warmest).

I started thinking. Where are the world’s great places for wine? For argument’s sake let’s take a look at Germany. Riesling is the grape, of course, but where in Germany exactly? Germany has the world’s most northerly vineyards, but take a close look at a map of Germany’s greatest vineyards, its Grand Crus. Practically all of them lie along a river, the Rhine and Mosel, on steep, south-facing slopes with slate soils. Why? What makes those places so special? The answer lies in a unique combination of factors. The rivers moderate the temperature. The slopes intercept more sunlight and thus heat that the surrounding flat lands. The slate soils warm rapidly and then radiate that heat back into the vines as the temperature falls after the sun goes down. In other words, it’s a warm spot in a cool climate. Check out the Doctor vineyard above the town of Bernkastel along the Mosel River.

Now take a look at our own Rogue Valley. We have what most would consider a moderately warm area. In such areas the cooler spots tend to be at higher elevations, shaded, such as at the base of a cliff, and/or oriented away from intense direct sunlight.

So here we are at a time of year that would normally be the middle of harvest, but this has been one of the hottest years on record for the Rogue. As a result, nearly all of the valley’s wine grapes have been harvested. But not at Ledger David Cellars. What? Everyone else has picked but us? What are we doing wrong? What is happening? Well…our estate vineyard ranges from 1,844 to over 1,975 feet elevation and enjoys eastern and northeastern exposures. The result? We are quite a bit cooler than most other vineyards and that results in a much slower, more even ripening of the fruit. Our site also allows us to achieve maximum “hang time”, a term in grape growing and winemaking that describes the seasonally late time frame in which the grapes ripen enzymatically without increasing in sugar content. Essentially the grapes develop aromatic complexity while the flavor compounds intensify. Late season ripening doesn’t happen very easily, if at all, if the grapes are exposed to the direct sun. They tend to raisin and take on a cooked fruit quality that isn’t necessarily desirable in wine. But on our elevated slopes the vines are gently warmed by the morning sun and caressed by afternoon shade. In other words, it’s a cool spot in a warm climate, and that is one of the things that makes it so special.