Celebrate two years with Ledger David Cellars at our Thanksgiving Weekend Open House event, Nov. 29-Dec. 1 from 12 to 5 p.m. Enjoy fall comfort foods and toast our new release 2011 Cabernet Franc and our first vintage 2010 Tempranillo. And enjoy our signature Primoris Chenin Blanc and other award-winning estate wines. Also, listen to live music from the rock and popular guitarist Jeff Kloetzel on Saturday and flamenco guitarist Grant Ruiz on Sunday from 2-4pm both days.

Stop by the Artisan Corridor in Central Point this weekend – construction has ended on Hwy. 99 and a new year is set to begin!

The People’s Coast Classic: 363 Glorious miles down the Oregon Coast 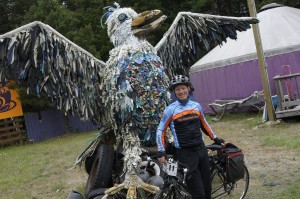 Visiting Art 101 in the coastal town of Bandon.

The back story. It was late winter 1998, my daughter was 7 and my son was 2. I had just bought a new touring bicycle and was determined to soon ride my new bike down the Oregon coast from Astoria to Brookings. It is now a not so soon 17 years later, my daughter is newly married, my son just went to his first high school homecoming dance Saturday night and from September 8-14, I was finally able to realize my dream of bicycling the most beautiful coast in the world. And I did it on that very same bicycle.

Day 1. After spending the first night in the Astoria High School football field, made famous in the movie The Goonies (check it out), I awoke early dawn September 8 in a dew soaked tent so excited to get rolling down the Coast. With a full dose of coffee and breakfast at the Maritime Museum and the requisite fanfare and photos of the riders, some 45 plus cyclists and our support staff headed Southwest in a long stream out of Astoria with the first stop 25 miles ahead in Seaside with the day to end in Tillamook 68 miles down Highway 101. The day was sunny and simply perfect.
Landing in Tillamook I set up my tent and grabbed a beer, graciously provided by the Rogue Brewery, and headed to our mobile shower truck for one of the best soakings I have ever had. The wonderful David Gremmels of the Rogue Creamery had in the meantime arranged for me to get a massage at the mobile massage tent! This is not the roughing it, solo ride, I had planned on doing 17 years ago. Oh no, this was pure biking, camping, eating and drinking fun like it should be. I didn’t even have to carry my gear! Really, this was my version of a week at a mobile Ritz Carlton.

Day 2 meant the longest day of riding starting out climbing and descending the 3 capes out of Tillamook head. Cloudy to start, the day cleared with little wind and more perfect weather. Just magnificent! Onto Newport and a gala dinner with Ledger David wines, plenty of amazing Rogue Creamery Cheeses, organic fruits and vegetables, and fresh line caught tuna. All this inside the incredible Oregon Coast Aquarium, which I encourage everyone to visit.
The following morning I rode back into Newport and explored a bit of the historic Nye Beach neighborhood, had a double shot of espresso and then headed back the Rogue Brewery under the bridge for lunch and a brewery tour headed up by the brew master John Maier, who was also riding with us. John was my off and on riding companion. He is a true gentleman and makes some really fine beers! The afternoon was perfect as we headed down the next leg of our adventure and the shortest distance of riding for the week. A short and beautiful 25 miles ended in the lovely town of Yachats.

Camping in Yachats was windy and chilly but dinner in the shelter house was cozy and supplied with delicious Ledger David Cellars wine making for some very happy riders. Late in the evening, shenanigans ensued with the incredibly high energy Bill Bloxum’s bike being suspended in the rafters by our illustrious support staff. Hilarious! It’s important to note that Bill’s company F.C. Bloxom generously supplied all our produce and fruit for the ride.

The Yachats to North Bend ride was a long 73 miles and I have to say lonely, which ironically, was part of the whole trip. The riders were spread out far apart each day giving plenty of time to be alone with ones thoughts. Not a bad thing. The bridge into North Bend is high and scary. Lots of wind and our support crew shuttled a lot of us. I hadn’t been in a car all week and wasn’t about to do that regardless of wind and fear. So I walked across with my bike. The camping in the North Bend baseball fields was the least desirable site of the ride. As I rode into the ball field I noticed that the outfield where many riders had already set up camp was lush with taller green grass. It looked like it was being well watered. The infield was dry and the grass was short. In my delirium of the day’s ride I just thought, hmmm I’ll set up my tent behind the pitcher’s mound where it was dry, thinking to myself “ what if the sprinklers come on at night.” They did. Everyone to a rider, except me were soaked. Completely soaked. Hours went by in the darkness, with support staff and a maintenance man trying to get the water shut off. The next morning it was a mini Katrina. Sprinklers shoot up, rain falls down, and rain flies aren’t made for that. It was bad. The great part was the way everyone handled the event. Lots of laughter and good spirits about the whole thing. A testimony to the quality people I rode with all week. Incredible people!

Day 5 was a solid 69 mile ride, mostly gray skies but the grandeur of the Southern Oregon Coast made of up for the clouds. Bandon was a welcome rest stop and Port Orford showed that it is an up and coming little destination with a new restaurant and really fine new art gallery. A short ride out of Port Orford and past Humbug mountain put us into our final campsite of Arizona Beach. It’s a funky little spot of State Park with an outdated motor inn. Worth visiting. Lots of bear scat and a resident bull elk added to the whacky charm of the place. Our final night of camping was a bit melancholy for me as the trip was coming to an end.

Day 6 meant 45 miles of incredible riding on the South Coast. The night before there was talk of the next days “climb”. I guess I was thinking too much about it. The ride from Arizona Beach into Gold Beach was mostly pastoral and I was thinking this isn’t so bad, until I left Gold Beach. The world changed. I was climbing. And climbing and climbing. It wasn’t ending. I was on the “back” side of Cape San Sebastian. It was my version of hell. It didn’t seem to end. When I reached the top, it was all fog. All I could see was the sign for the cape and the trees right in front of me. For those who have seen it on a clear day, you know how high you are above the ocean. It is incredible. On this day it was pea soup. I cried, got back on my bike and flew down, down, down the hill like a free fall. It felt like floating in a dream.
I arrived in Brookings at the back of the pack at Azalea Park near the Chetco River to cheering and a medal and hugs and smiles all around. A quick lunch and I gathered my gear, put my bike in the back of my escorts, Ryan and Jen’s scout vehicle and was whisked away back to the Rogue Valley. My ride was over.
I am changed by this. I had a dream that I didn’t give up on. I had so much support from my family, Lena and David, David Gremmels and so many others. Ledger David Cellars sponsored this for me and I am forever, beyond all words, grateful.

There is so much more I’d love to share about this adventure, so please come by the tasting room and lets visit!
Keep dreaming! 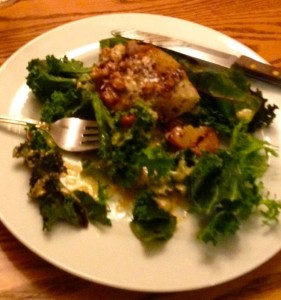 You can either grill the pears on your grill or use a cast iron griddle with ridges on the stove top.

Make the vinaigrette. In a food processor or blender chop/pulse the shallots, garlic, both mustards and vinegar until incorporated. Add the olive oil and blend until the oil is emulsified.

Grill the pears. Cut the pears in half, core them and brush all surfaces with a light oil like walnut or hazelnut. You can slice a small piece off the back side of the pear to keep it from rolling but this isn’t necessary as the pears will rest on the greens just fine. Grill the pears cut face down. Cover and cook until heated through and nice grill marks appear…about 10 minutes.
In the meantime, toast the walnuts in a cast iron skillet on medium heat until toasted, about 5 minutes. Pour the warm toasted walnuts into a small bowl and add the crumbled Oregonzola Blue cheese and the honey. Stir lightly to incorporate.

On four plates place equal amounts of the mesclun mix and drizzle lightly with the vinaigrette.

When the pears are nicely grilled turn them over and place an equal amount of the walnut and cheese mixture onto each pear and place the pears on the beds of greens. 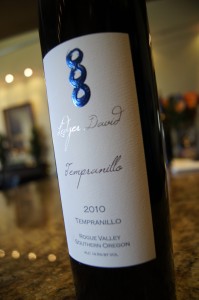 Ledger David Cellars is very excited to release our first vintage of award winning 2010 Tempranillo! Grapes are sourced from our estate vineyard located in the Wagner Creek Sub-basin in Talent, Oregon (Rogue Valley AVA) with an average elevation of 1900 ft.

The 2010 vintage was a bit challenging with a cooler season that set the harvest date back to October 22nd for optimum ripeness and flavor from 3rd leaf vines. The wine was beautifully custom crafted by B. Kiley Evans at Agate Ridge making just 247 cases of this gem.

This wine was featured in the October Sunset Magazine and was a silver medal winner at the 2013 World of Wine Festival here in southern Oregon. Aromas of clove, cinnamon and coffee followed by black cherry fruit and supple ripe tannins support a pleasing long finish.

Taste this and other estate wines at our Le Petit Tasting room in Central Point (open Oct.-April, Thurs. thru Mon., noon-5pm; May-Sept., daily noon-5pm.) next to the Rogue Creamery and Lillie Belle Farms Chocolate. Visit www.ledgerdavid.com for more information on purchasing our wines or to find out how you can join the Primoris Wine Club!